On Black Thursday, I made a ridiculous purchase. Office Depot had their 20″ monitors cheap. So (naturally), I bought 2. I thought, “I have a MacBook Pro, why not hook up 2 external monitors?! It will be awesome.” If Al Gore can do it, so can I!

Unfortunately, I did all my research after the fact. I ended up spending way more than I intended, but vowed that in the end, I would write a blog post so the rest of the world did not have as much trouble as I did.
One of the reasons that Al Gore’s setup works is because he is using a mac tower with multiple graphics cards. –obviously, not the case with my MacBook Pro. 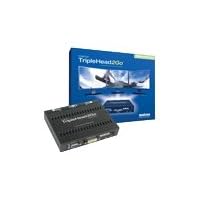 In the end, I realized that this was a bit excessive and the Dual Head 2 Go Digital would have served the same purpose because I only had 2 monitors to hook up. I found myself going in circles on the Matrox site, but it might be worth taking a gander to determine which model will support your system.

You’ll need to download the new driver off Matrox Graphic’s site. This will add the Matrox GXM Control Panel to your System Preferences.

As you can see from the settings, I marked the number of displays as 2. Then, under Active Resolutions and Refresh Rates, I chose 2 1680×1050.

Changes will also need to be made to the Display Tab under System Preferences. The weird thing about the Matrox hardware is that it causes your external monitors to be seen as one huge monitor.

The tricky part was getting the right screen dimensions to display in the Display Preferences. Everywhere that I read, people kept saying they just plugged it in and…magic, it worked. So, when it didn’t work for me, I just got even more frustrated.

Monitors to Matrox Box
Keep all your cables digital. A couple of times, I tried to mix in my VGA cords (the Head2Go Digital can go Digital or Analog), adding another conversion into the mix only causes problems. So, when I plugged the monitors into the hardware I used 2 DVI cords, plugging them into the first and third slots on the Matrox box, per the hardware directions.

This is the same adapter that it used to connect laptops to Apple’s Cinema Displays. When I first hooked it up, the monitors looked Interlaced. The third (and final) trick was to put the computer to sleep. When I woke it up, it recognized the external monitors like a champ.
This process wasn’t as easy as everyone made it out to be, but I can’t argue, I am pleased with the outcome.